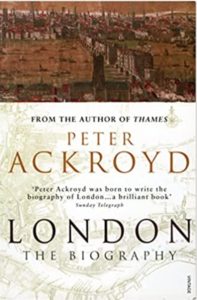 "Wooden paving was laid upon many of the main thoroughfaires in the 1830s". (Page 76)

Voir aussi le billet : The time when London’s streets were paved with wood

"The rewards of the city sweepers were based entirely upon locality, but the most obvious product was "street mud" which was sold to farmers or market gardeners". (page 341)

The Wesminster Paving Act of 1762 inaugurated legislation for lighting and paving throughout the city." (page 309)

"In 1736 an Act was passed permitting  the city authorities to implement a special lighting rate or lam rate so that all the streets could be properly illuminated each night; as Stephen Inwood has suggested in A history of London, 'this gave the City around 4,000 hours of lighting a year, compared to 300 or 400 before 1694, and 750 from 1694 to 136'. Suburban parished also began to levy special rates for lighting; so gradually, and by degrees of illumination, London at night became a different city". (Page 442, chapter "Let there be light") 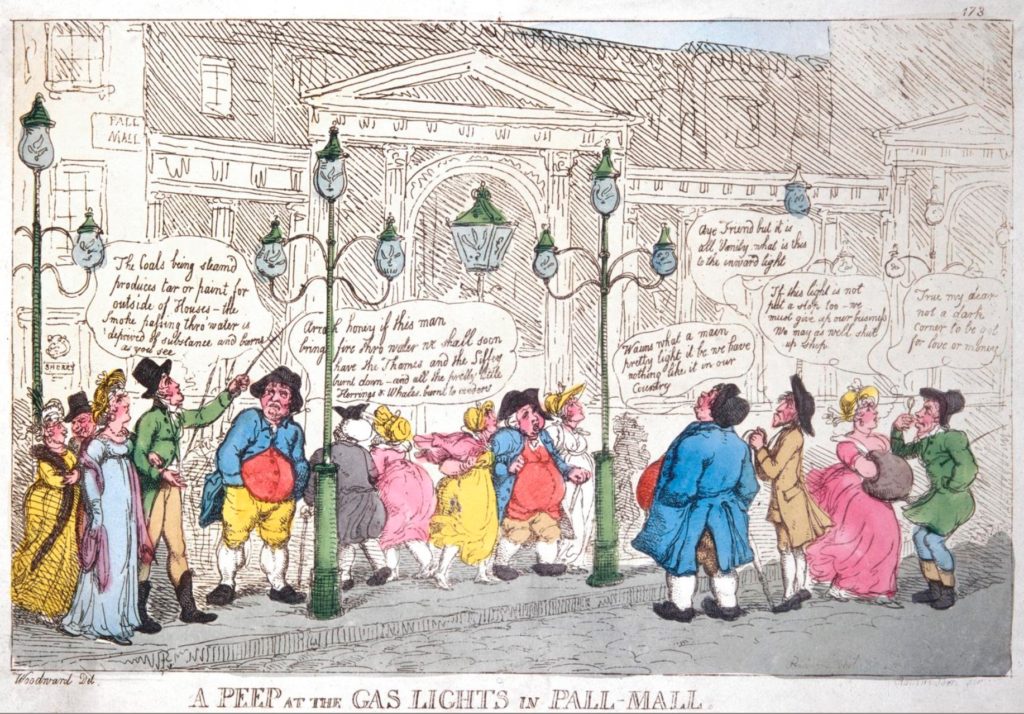 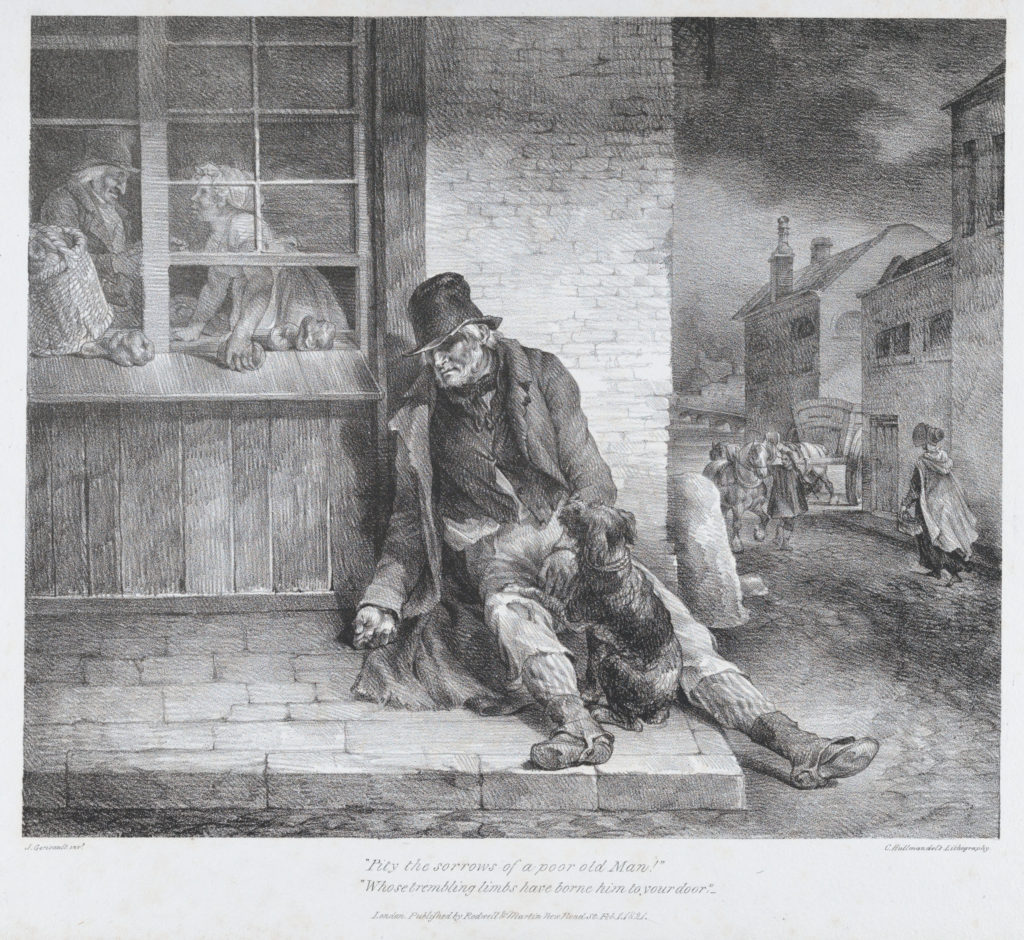 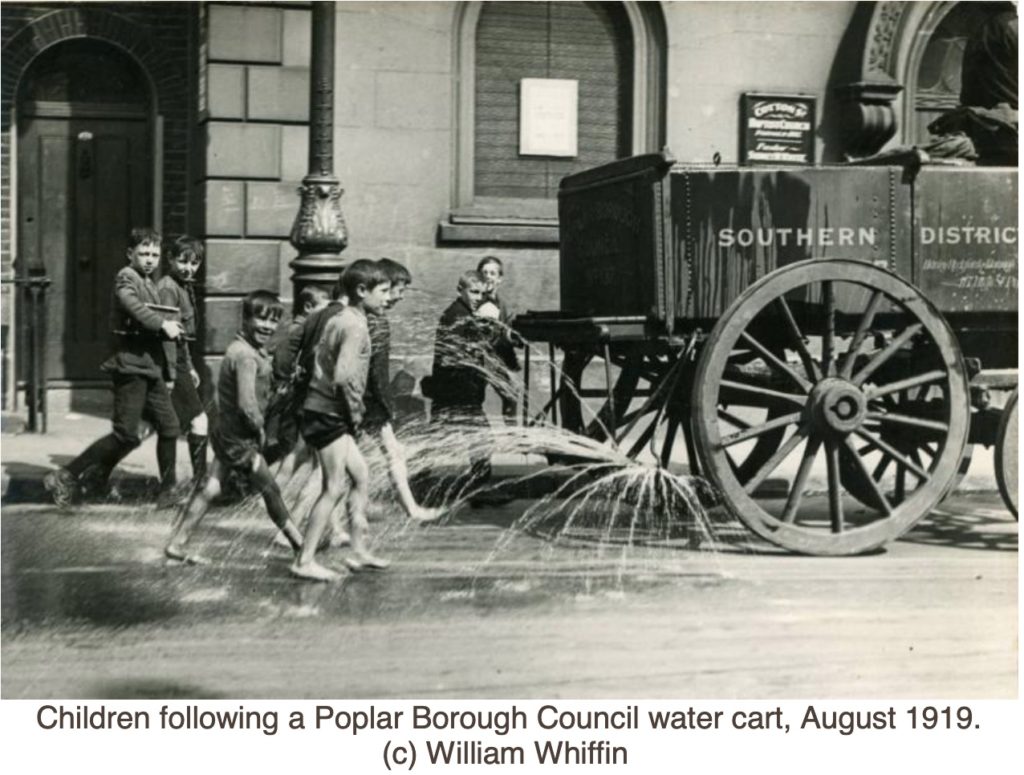 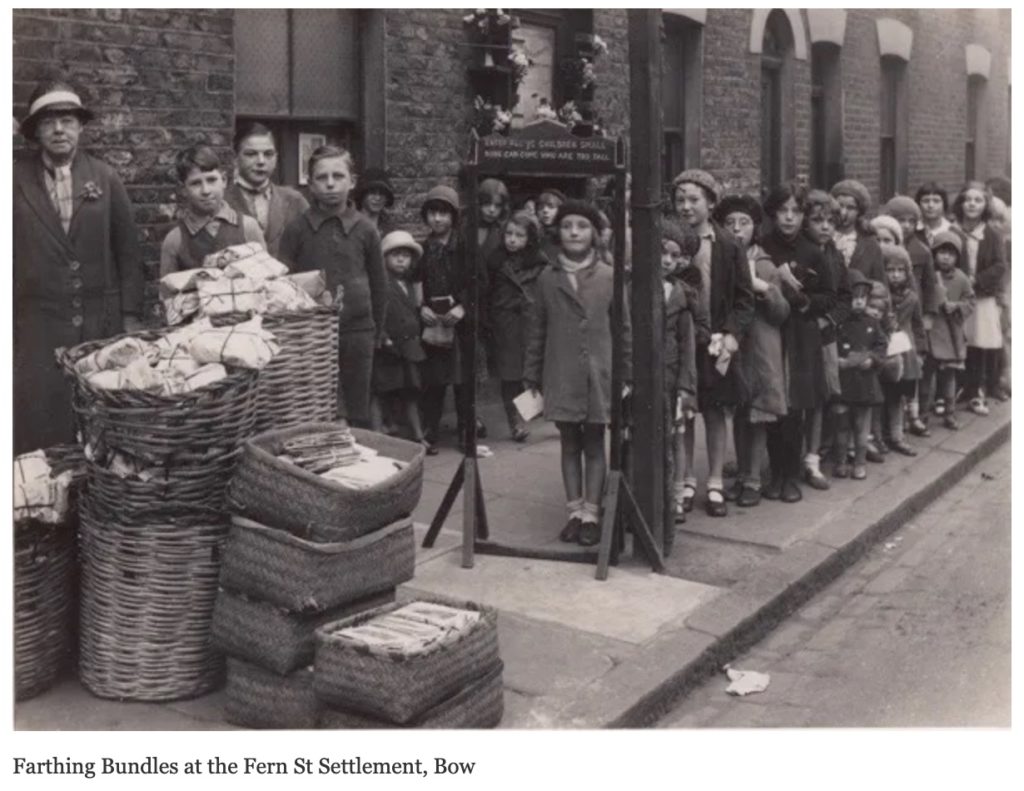 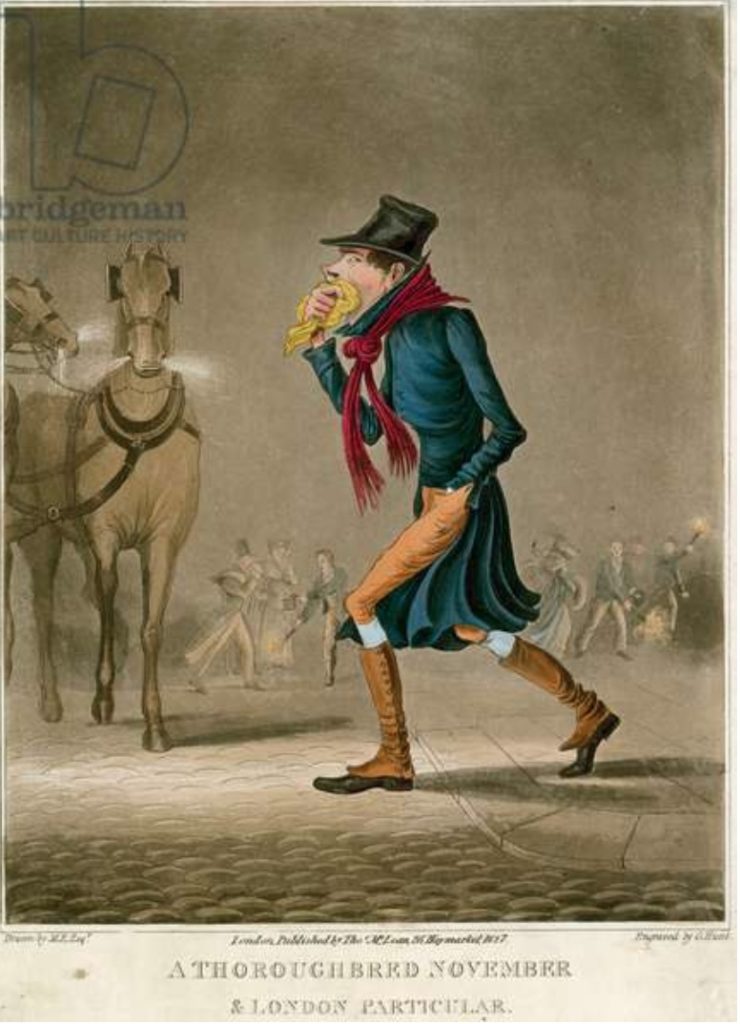 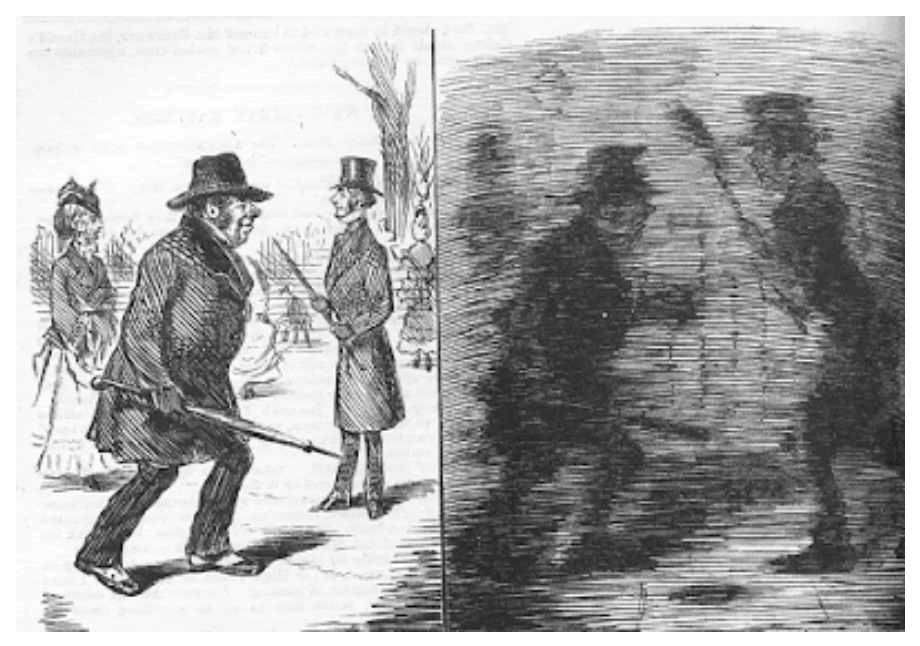 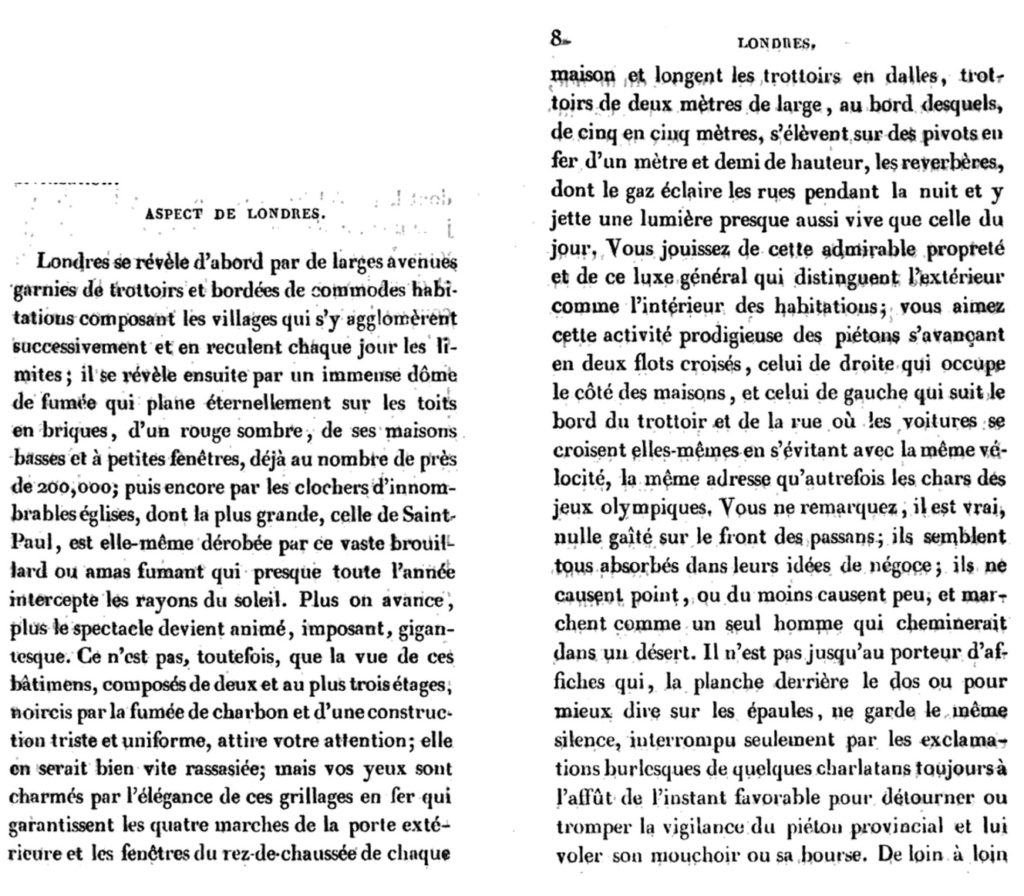 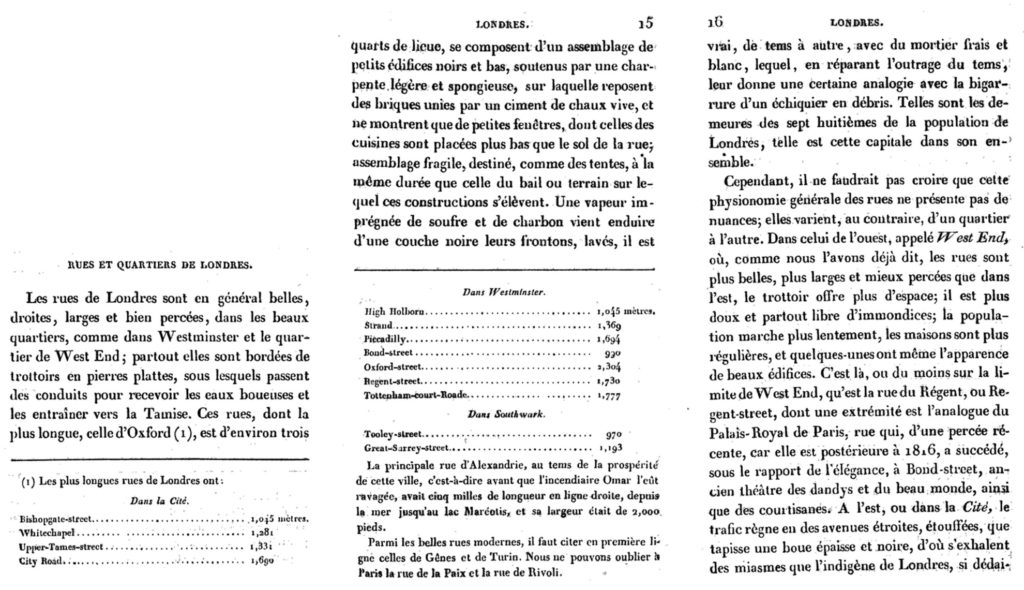 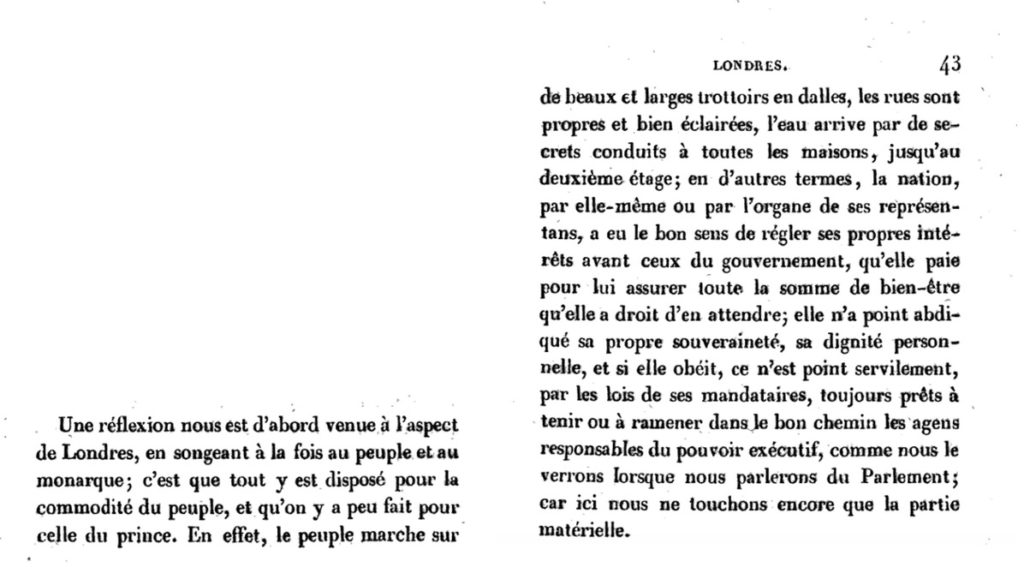 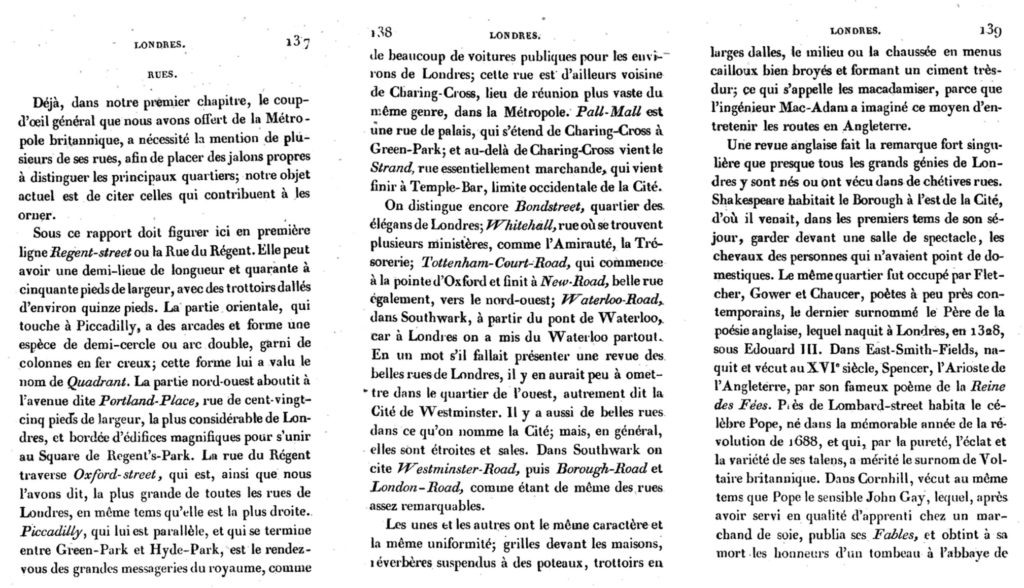 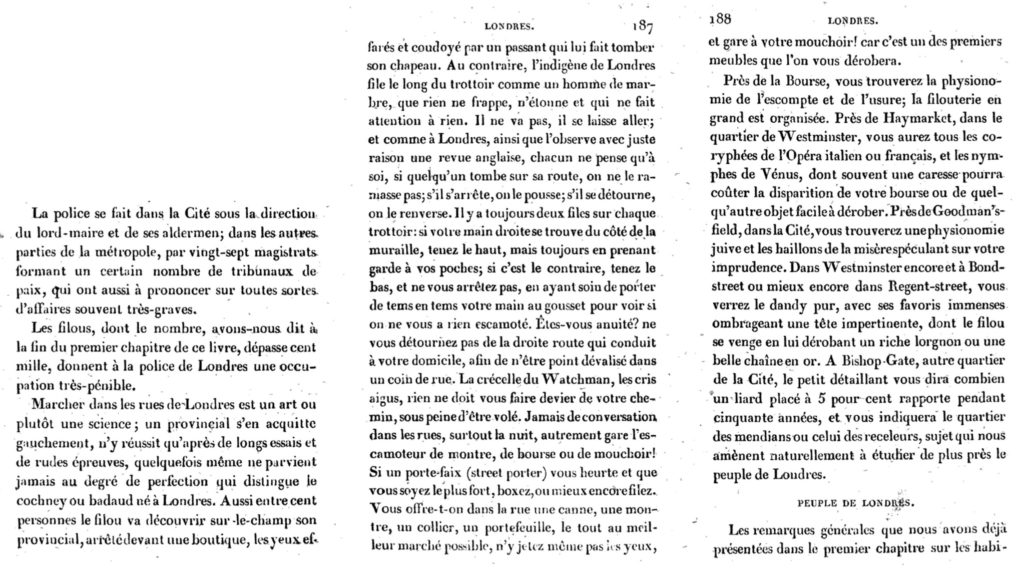 In London, the responsibility of paving and cleaning the streets was normally written into the building lease/sale. The problem with the London streets in the early 18th Century was the lack of consistency. The paving stones were round and fit to walk upon, but in a carriage the ride was quite rough. The wide flat stones, which were perfect underfoot, created a bumpy ride for they were raised above the flat of the road.

The 1762 Act specified that Purbeck stone should replace the previous stone. The act also called for the replacement of the drainage kennel, which was normally placed in the street’s middle, with kerbside gutters. This standard of the Purbeck stone remained in place throughout the late Georgian Period. Eventually, gravel was added between the stones to level out the road.

The act also required a system of street cleaning. As a side benefit of working as a Scavenger (those paid to clean the street by at a parish rate) grew, the streets became cleaner. For example, discarded ashes were collected to be sold to manufactures of inferior place bricks. Eventually, carts carrying water (barrels pierced with holes) kept the dust down on the road.

In the early 19th Century, the occupant was responsible for sweeping the pavement before his house. The parish scavenger removed the dirt from the street and that on the carriageway.

This, in turn, inspired the 1766 London Paving and Lighting Act. These changes began pushing London, now at the forefront of major infrastructure projects, into the new century. The “reorganization” of roads and lighting, the naming of streets, and numbering of houses “all made London tangibly more manageable, and more moder too” (White, J. (2011) City rivalries and the modernisation of Eighteenth-Century London 1720-1770, p. 20).

As a student of urban history, its hard to understate how ambitious and revolutionary this act was. This would have a significant impact on public health (drainage, road quality) and also change the way buildings would be fit into the fabric of cities (more space allotted for improved streets, increasing the size of streets) which would in turn be codified by the Building Act of 1774. Uniform lighting also helped to reduce night time accidents and crime, pushing us increasingly towards 24 hour economies.

Curbside gutters replaced drainage kennels, Purbeck stone replaced cobblestone or paving stones (and would be revolutionized, again, by Macadam in the 1820s), and street cleaning would help reduce the dust and rubbish in the roads.

Without these aggressive public works projects, and systems for uniformity, the productive machine of the industrial revolution would have been significantly hampered. As the guidebook in 1820 tells us, the “Paving Act” led the way for growth and development of London well into the Regency era.

Charles II, 1666: An Act for rebuilding the Citty of London

"The Act required that all roads known as High Streets should be 'paved round, or causeway fashion' by the inhabitants (my italics) to at least 6' distance from the foundation of the houses, with flat or broad stone ... 'not paving one door higher than another'. Road menders (called 'paviours') would be fined 5s when their excessive use of gravel caused blockages to 'the common sewers upon a sudden rain'; gravel should only be used between paving stones, and then well rammed."

Delivery men were also constrained. All householders were required to provide a level stone path outside their properties, and some householders also placed posts to separate the resulting pavements from the roadway. These pedestrian paths were to be well protected:

'And farther, henceforth no beggars or vagrants, tankard bearers, porters, or other persons whatsoever, bearing any kind of burthens on their heads, backs, or arms, horses, or any kind of cattle, shall be permitted at anytime of the day, from six of the clock in the morning until nine of the clock at night, to go or pass, or be led upon the said flat pavements in any street between the houses and the posts adjoining to the said flat pavements, except only for going into the said houses directly cross the said pavements, under the penalty of five shillings for every horse, or other kind of cattle whatsoever, and three shillings and four pence for every tankard-bearer, porter, and other person carrying burthen as aforesaid...'

"Since dress hems extended down to the feet for most of this period, it was necessary to raise the hem above the ground to keep the dress clean even in well-swept and paved streets. (...) The 19th-century invention of cheap rubber galoshes gradually displaced the patten, as did the widespread use of urban paving, especially elevated, paved pathways only for pedestrians - the now ubiquitous pavements (sidewalk in American English) - or hard road surfaces". Source : https://en.wikipedia.org/wiki/Patten_(shoe) 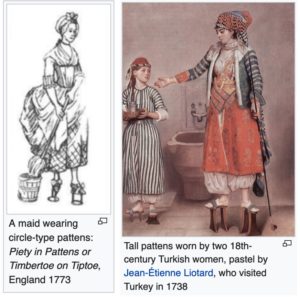 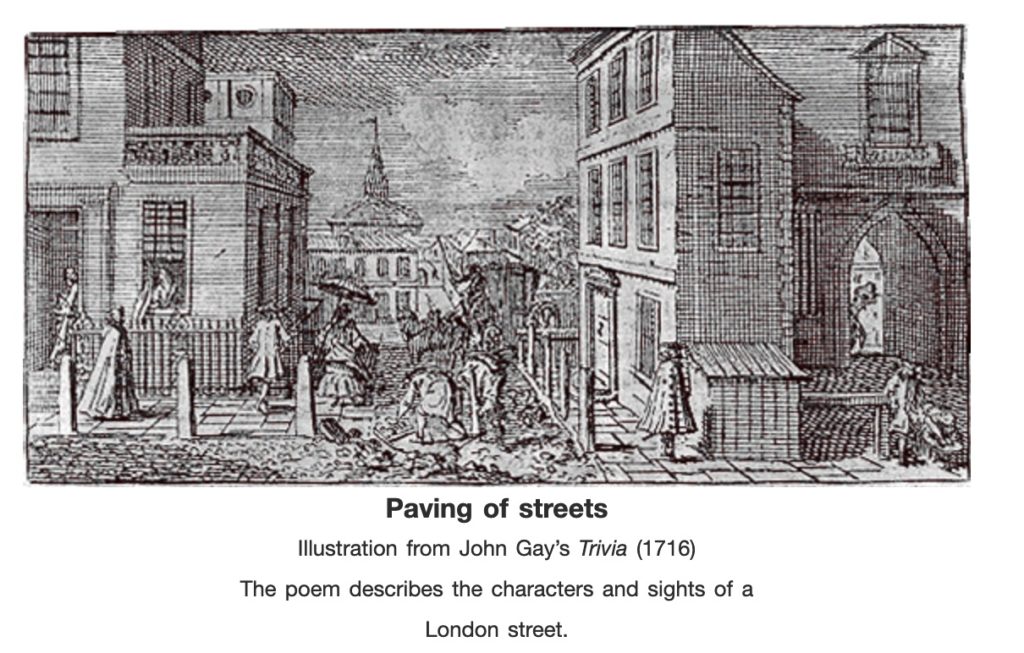 Source : the building of London 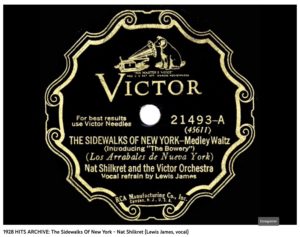