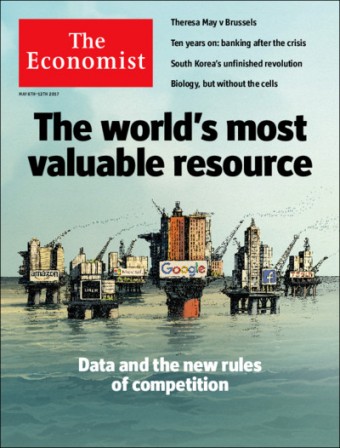 A new commodity spawns a lucrative, fast-growing industry, prompting antitrust regulators to step in to restrain those who control its flow. A century ago, the resource in question was oil. Now similar concerns are being raised by the giants that deal in data, the oil of the digital era.

The nature of data makes the antitrust remedies of the past less useful. Breaking up a firm like Google into five Googlets would not stop network effects from reasserting themselves: in time, one of them would become dominant again. A radical rethink is required - and as the outlines of a new approach start to become apparent, two ideas stand out. The first is that antitrust authorities need to move from the industrial era into the 21st century. When considering a merger, for example, they have traditionnaly used size to determine when to intervene. They now need to take into account the extent of firms' data assets when assessing the impact of deals.

An oil refinery is an industrial cathedral, a place of power, drama and dark recesses:ornate cracking towers its gothic pinnacles, flaring gas its stained glass, the stench of hydrocarbons its heady incense. Data centres, in contrast, offer a less obvious spectacle: windowless grey buildings that boast no height or ornament, they seem to stretch to infinity.

Yet the two have much in common. For one thing, both are stuffed with pipes. In refineries these collect petrol, propane and other components of crude oil, which have been separated by heat. In big data centres they transport air to cool tens of thousands of computers which extract value—patterns, predictions and other insights—from raw digital information.

Both also fulfil the same role: producing crucial feedstocks for the world economy. Whether cars, plastics or many drugs—without the components of crude, much of modern life would not exist. The distillations of data centres, for their part, power all kinds of online services and, increasingly, the real world as devices become more and more connected.

Data are to this century what oil was to the last one: a driver of growth and change. Flows of data have created new infrastructure, new businesses, new monopolies, new politics and—crucially—new economics. Digital information is unlike any previous resource; it is extracted, refined, valued, bought and sold in different ways. It changes the rules for markets and it demands new approaches from regulators. Many a battle will be fought over who should own, and benefit from, data.

Most important, the value of data is increasing. Facebook and Google initially used the data they collected from users to target advertising better. But in recent years they have discovered that data can be turned into any number of artificial-intelligence (AI) or “cognitive” services, some of which will generate new sources of revenue. These services include translation, visual recognition and assessing someone’s personality by sifting through their writings—all of which can be sold to other firms to use in their own products.

Although signs of the data economy are everywhere, its shape is only now becoming clear. And it would look pretty familiar to J.R. Ewing. There are the data majors, a growing number of wildcatters and plenty of other firms trying to get a piece of the action. All are out to exploit a powerful economic engine called the “data-network effect”—using data to attract more users, who then generate more data, which help to improve services, which attracts more users.

Researchers have only just begun to develop pricing methodologies, something Gartner, a consultancy, calls “infonomics”. One of its pioneers, Jim Short of the University of California in San Diego, studies cases where a decision has been made about how much data are worth.

The fact that digital information, unlike oil, is also “non-rivalrous”, meaning that it can be copied and used by more than one person (or algorithm) at a time, creates further complications. It means that data can easily be used for other purposes than those agreed. And it adds to the confusion about who owns data (in the case of an autonomous car, it could be the carmaker, the supplier of the sensors, the passenger and, in time, if self-driving cars become self-owning ones, the vehicle itself). 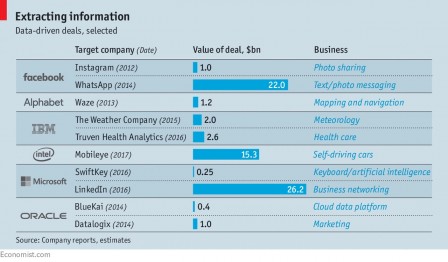 The way online markets work calls for new tools and unfamiliar tactics. But remedies have to be carefully tested and calibrated—a fix for one problem might give rise to new ones. For instance, the more consumers are pushed to deal directly with price-bots (to thwart the transparency that allows rival sellers to collude), the more the algorithms will learn about the characteristics of individual customers. That opens the door to prices tailored to each customer’s willingness to pay, a profitable strategy for sellers.