"What will the world of cities look like in the future? Will they be able to work hand in hand to tackle geopolitical and climatic threats? With the support of international networks, cities are redefining their positions in the global arena and inventing new models of governance. New forms of civic participation are emerging. Private investors and digital giants are playing an increasing role in urban development. Cooperation between towns, cities, regions and states is being reinforced, in a variety of different configurations. What is the future of the Global City? Will the Paris Region assert a development model with its own special chemistry?" 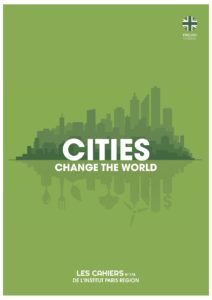 The latest publication of the Institut Paris Region is now available, with inside our interview with Renaud Le Goix (on line here or in PDF, here).

What can we learn from comparing urban economic models? Are we moving towards the privatisation of city making?

Renaud Le Goix : A comparative and historical approach helps us to observe the spread, and in a sense the triumph, of the entrepreneurial model for urban production. The system we often come across today is that of macro-plots, in other words very large lots handed over to single private developers. This model, which leads to the privatisation of circulation and access routes, recalls the gated communities and condominiums that have existed for so long in the USA. These examples show how hard it is to manage these common areas openly, and highlight the tendency to want to control their modes of use and the effects they have on property values. It appears that the more the scale of intervention of private developers increases, the more the process of enclosure intensifies: public access tends to be restricted, excluding anyone who doesn’t belong to the “club”. In the United States, the process of the privatisation of public space arises directly from city financing models. Local resources are highly dependent on property values, which, as they rise, increase fiscal contributions to local government budgets. Restricted access has been all the more strongly encouraged because by increasing property values it has provided responses to fi nancial difficulties experienced by local governments. During the Nixon and Reagan administrations, local governments were fi nancially throttled by a 50%–plus reduction in federal funding. This prompted a gradual shift from a managerial system, which aimed to provide the population with facilities according to fi scal capacity, to a process where attractiveness and competition are used to lure investors. This entrepreneurial regime has repercussions on the way public space is produced. A good example is New York, which has developed large-scale Privately Owned Public Spaces (POPS) schemes since 1961. In 1975, the city was bankrupt. A deal with private developers made it possible to continue to produce quality public spaces without paying the price: they obtained supplementary building rights based on the number of square feet of public space they agreed to develop. This entrepreneurial model then became more widespread because very large cities compete to attract property investors and large firms: they tend to copy one another. This contributes to the spread and standardisation of urban models (international architecture and commercial outlets, etc.) and responds to economic development benchmarks.

IBS : We have to distinguish two different scenarios where the “privatisation” of public spaces is concerned. First there’s the situation where such spaces belong to a group of private joint owners, who are either owner occupants or small investors. We often see this in France when a developer intervenes on the scale of a macro-plot and disappears when the last home is completed. Open spaces, whether accessible to the public or not, are usually owned by the owners association (in France the Association Syndicale Libre). This is also the model for gated communities in the US. The second scenario, which is very common in England, is where open spaces belong to financial investors who own entire neighbourhoods. These are also known as POPS. In both scenarios, the question of who owns and manages public space increasingly tends to be bound up with that of the creation and management of services within the neighbourhood. As well as the public or private ownership of public spaces, their accessibility is what defines them. The issue of knowing whether they are open to all or not does not only arise in terms of public access, but also where urban service providers are concerned: whether these be minicabs, charging stations, external communication, micro-mobility or logistics, public space is a key resource for them. In this regard, it is interesting to look at work in America on ‘curb management’. The kerb is where the different functions of a roadway meet. This loading-and unloading area is where the most profound changes occur in terms of new uses and new partnerships between public and private players. There is no single word for kerb in French: A new term would be useful to materialise its reality and the specific issues relating to it. 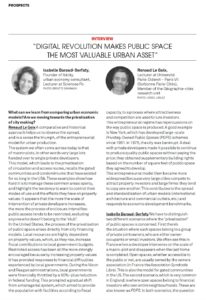